The Indians fought hard but fell to Webster City on Tuesday. Leading the way for the Indians offensively were Leah Aljets (SR) and Delaney Ehn (JR), both posting double digits for the Indians. Sarah Powers chipped in 9 points, shooting 100% from the line while also dishing out 4 assists to lead the Indian attack. Senior, Leah Aljets, controlled the boards with a team high 6 rebounds. The Indians worked hard on the defensive end of the court grabbing 12 steals as a team. Despite the defensive effort, the Indians were unable to take down the Lynx, falling 47-60. The Indians travel to Manson on Friday to take on the Cougars.
PAC Girls With Late Fault in Season Opener
by Jace Davidson & Matt Vanderham

​Many fans in the Pocahontas community were questioning what the expectations of the girls basketball program was this year. That question was answered last Tuesday night, with these girls showing tremendous effort in a late fall against the Humboldt Wildcats. This squad had control through the whole game, until midway through the 4th quarter where the Wildcats got hot and took control of the game taking the win away from our girls, winning 60-56. This Indian unit proved to us they have what it takes to have a successful season in their future.
Leading the way for the Indians was Kaylee Shivers (JR). Shivers led the team with 18 points on the night shooting just under 50%. Then senior leader, Leah Aljets, showed us why she is the better Aljets by having a hay day on the stat sheet. Aljets posted a monsterous double-double by notching in 13 points and bringing down 14 rebounds. This senior captain also contributed on the defensive end by ripping away 5 steals on the night. Speaking of the defense, our unit managed to nab 16 takeaways, always making it difficult for the offensive team. Join us next Tuesday as both the girls and boys have their home opener against Webster City.

Indians Drop Contest to ESC Raiders
by Joe Hopkins
The PAC Indian girls basketball team battled the East Sac County Raiders on December 12. The girls put up a good fight, but it wasn’t enough to get the win. The leading scorer for the Indians was Jill Vonnahme (SR) dropping fourteen. She also racked up 4 rebounds, 3 assists, 5 steals, and 1 block. Elizabeth Ricke (SR) tallied  a double-double with 12 points and 10 rebounds. Kaylee Shivers (SO) had a great all-around night getting 6 points, 4 rebounds, 4 assists, 1 steal ,and 1 block. The Indians had a great defensive night totalling 16 defensive rebounds, 11 steals, and 4 blocks. The Indians did end up falling short, 55-64, making their new record (3-3). They will play Sioux Central on December 15.

Indians Take Down The MNW Cougars
by Andrea Klaassen
On December 1, the fairly newly-formed Pocahontas Area Indians varsity team earned their second win of the season at Pocahontas against the MNW Cougars. The Indians took the lead in the first quarter, and maintained their lead throughout the whole game. In the first quarter, the Indians came out bursting with confidence and momentum. That momentum carried them through the game and earned them the win.
Leading the team with 13 points was Kaylee Shivers (SO). Jocelyn Johnson (SR) and Delaney Ehn (SO) followed, racking up 12 points each. Out of the 45 field goal attempts from the girls, 15 (33%) were successfully made. A good 9/20 (45%) 3-point attempts found their way into the basket. Jocelyn Johnson (SR) was the leading 3-point shooter, knocking down 4/7(57%) 3-pointers for the team. On the free throw line, the Indians made 11/18 (61%). Delaney Ehn (SO) led in free throw points, claiming 5/7 (71%) of the free points available to her. Jocelyn Johnson (SR) led in rebounds, with 3 offensive rebounds and 4 defensive rebounds. Leah Aljets (JR) collected 6 assists for the team. Leah Aljets (JR) led the team in steals, stealing the ball from the opposing team six times. Jill Vonnahme blocked the Cougars from shooting three times, preventing them from scoring. The squad is looking forward to their next match against the Newell-Fonda Mustangs at Pocahontas on Tuesday.
Indians vs. Lynx
by Joe Hopkins

The Indians took on the Webster City Lynx this last Tuesday, November 28. The Indians struggled in the second game of their season, falling to the Lynx 26-49. Jocelyn Johnson (SR) led the team in rebounds with 10 and combined with Leah Aljets(JR) and Sarah Powers (SO) in assists with 3 total. Aljets had a good night with 9 points, 1 assist, 2 steals, and was 50% from beyond the arc. Elizabeth Ricke came close to a double-double racking up 10 points, 9 rebounds, 3 steals, and a block. The Indians will be hoping to win their next few home games against Manson-NW Webster and Newell-Fonda. 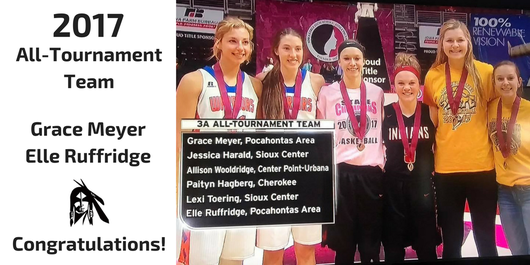 by Shea Ruffridge
Wells Fargo Arena ~ The PAC/LM girls basketball team played in their third consecutive state finals game this past Saturday in Des Moines. The Indians had a tough task at hand, playing undefeated Sioux Center, but they were up to the test. The game was a shootout in the first quarter. At the end of the first, the Indians led 20-19. From there, the Indians lead would only increase. The Indians stayed hot in route to their second straight title. The Indians defeated the Warriors 61-38. Ruffridge scored 22 for the Indians. Hjerleid pitched in 12 and Faith Meyer had 11. Ashlyn Weidauer had a great finals performance scoring 8 off the bench for the Indians. The Indian girls made 12 3-pointers in the finals which helped lead them to their second state title. Ruffridge and Grace Meyer were both selected onto the 3A all-tournament team. Ruffridge was elected all tournament team captain. Saturdays game was an emotional one for the players, coaches, and fans. It was this senior groups last game together, and boy they were fun to watch. These girls left their marks in not only the school's record books, but also the state’s. The ending for the PAC/LM girls couldn’t have been any better. The senior group won their second straight championship, and also won their 100th game in the past four years.

by Tyler Vick
Wells Fargo Arena ~ The Pocahontas Area Laurens-Marathon Indians are now back-to-back state champions after defeating the Sioux Center Warriors 61-38 on Saturday, March 4. This was the seniors 100th win in their high school career! Elle Ruffridge added a new record to her numerous records after scoring a total of 250 points in the state tournament. Two Indians, Elle Ruffridge and Grace Meyer made it on the All-Tournament Team after their outstanding performance in the state tournament! Elle Ruffridge led the team in points after dropping a total of 22. The rest of the team’s points came from Payton Hjerleid (12), Faith Meyer (11), Ashlyn Weidauer (8), Grace Meyer (4), and Olivia Ahlers (4). Elle led the team in assists with a total of 4, and Faith Meyer and Elle both led the team with two steals. PAC L-M finished the year with a 27-1 record after their victory over the now 26-1 Sioux Center Warriors. Great job and good luck next year girls!

by Danielle Lawman
Wells Fargo Arena ~ The PAC-LM girls basketball team will play for their second straight championship. The Indians have reached the title game three seasons in a row being last year's state champions and the previous year's state-runner up. The PAC-LM Indians defeated Center Point-Urbana last night, 80-59, allowing them to reach the title game for the third season in a row. The PAC-LM seniors have a record of 99-7, and winning the state championship game would give them 100 career wins. Elle Ruffridge not only led the team with 48 points, but she also set a record because of those points. Elle also broke a record for hitting 8  3-pointers.  The PAC-LM Indians will go on to play the Sioux Center Warriors for the class 3A title game on Saturday, March 4, at 4:00 p.m. in Des Moines at Wells Fargo Arena.

by Tyler Vick
Wells Fargo Arena ~ The Pocahontas Area Laurens-Marathon Indians will now go on to fight for and defend the class 3A crown for the third year in a row after defeating the Center Point-Urbana Stormin Pointers 80-59 in the semi-finals. During the game, Elle Ruffridge broke two more state records and tied for one. Elle scored an outstanding 48 points in the game, beating the previous record of 46. 24 of these came from only 3-pointers, which set the new 3-point record at 8  3-pointers. Elle also tied the free-throw record after going 16-16 from the line. This makes a total of 6 broken records for Elle in just this year. Scorers in this game include: Elle Ruffridge (48), Payton Hjerleid (11), Faith Meyer (5), Olivia Ahlers (4), Kenzi Sullivan (4), Grace Meyer (3), Ashlyn Weidauer (3), and Kaylee Shivers (2). Elle Ruffridge led the team in rebounds with a total of 7, Grace Meyer led the team in assists (4), and Payton Hjerleid led the team with a total of 5 steals. The seniors will go to the Wells Fargo Arena for the last time in their high school career to hopefully increase their record of 99-7 to 100-7. Go watch the PAC L-M Indians play for the crown against the undefeated Sioux Center Warriors on Saturday, March 4, at 4:00pm in the Wells Fargo Arena in Des Moines, Iowa. Good luck at state Indians!

STATE BASKETBALL QUARTERFINALS
INDIANS DEFEAT CLEAR LAKE 46-22
by Shea Ruffridge
Wells Fargo Arena ~ PAC/LM fans flocked to Wells Fargo Arena Tuesday evening to watch the Indian girls basketball team take on Clear Lake. PAC high school teacher, Kevin Stumpf, was honored before the whistles blew as the “Fan of the Year”. The Indians came into this quarterfinal game with a record of 24-1. All-time Iowa state scoring leader, Elle Ruffridge, dethroned another former state leader Tuesday as she passed Wapsie Valley's Jamie Sickles with the most total assists in state history. Ruffridge dished out two assists against Clear Lake setting the new state record at 795. The Indians had no problem with the Lions as they rolled past them with a 46-22 victory. Grace Meyer lead the Indians in points with 16, including four 3-pointers. Her sister Faith tallied nine points for the Indians. Ruffridge finished with 11 on the night. The PAC/LM Indians will face CPU on Thursday night at 6:45 P.M.